Using the latest data from the U.S. Bureau of Labor Statistics: Consumer Expenditure Survey, ElitePersonalFinance analyzed the latest statistics to present the most accurate depiction of the average household budget and expenses in the United States.

The most common household expenses are housing, transport, and food.

The largest segment, where Americans spend most of their money, is housing – $19,884, or 33% of their expenses.

The second segment where Americans prefer to spend their money is transportation – $9,576, or 16% of their expenses.

The third segment where people prefer to spend their money is food – $7,729, or 13% of their expenses. 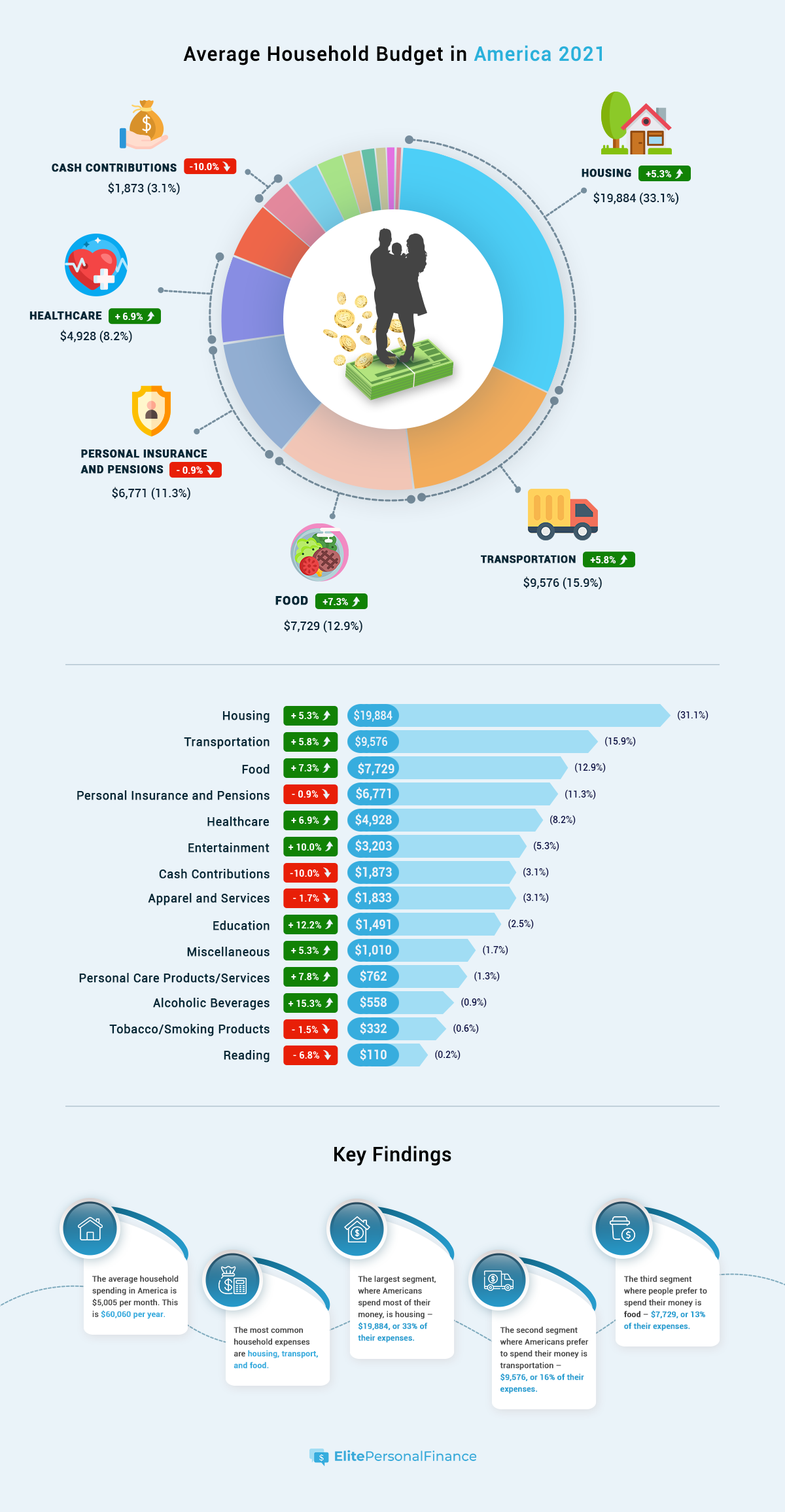 If we analyze the table below, we’ll notice that the average household spending increased in 10 of the 14 categories surveyed by the U.S. Bureau of Labor Statistics. The three largest household expenses – housing, transportation, and food-increased from 5.3% to 7.3%.

Housing is the segment where Americans prefer to spend most of their money. People spend $19,884 on average for housing, which is 33%. The next largest segment is transportation. For this segment, people spend $9,576, or 16%.

Shelter – encompassing rent, mortgage payments, property taxes, and insurance – accounted for nearly 60% of the total, while utilities, fuel, and public services accounted for just over 19%. As well, household furnishings and equipment contributed just under 10%.

Historical Average Expenses in the U.S.

Isolating the last four years of recorded data, the miscellaneous segment – made up of household supplies, appliances, equipment, furnishings, and other products that don’t fit directly into any category – saw the largest three-year growth rate at nearly 30%. Education ranked second at just under 21%, and alcoholic beverages ranked third at just under 21%.

Considering 2017 offers the latest official data, we used trend analysis to extrapolate the 2018 and 2019 columns. Using the last four years of data to apply a geometric average growth rate, we foretasted future values for each segment. While the sample is short-term in nature, the geometric average helps smooth out volatility in the numbers and provides a baseline for underlying trends.

Based on our calculations, we believe 2019 household spending will increase across all segments. With U.S. Q4 GDP coming in at 2.2% (annualized) and unemployment near historic lows, both are strong indicators of future price inflation. Absent of a recession, we also expected income to bounce back in 2019. It wouldn’t be surprising to see average income in the $78,000 to $79,000 range.

Changes in the Average U.S. Household Spending by Income

When decomposing the numbers by income, those in the lowest income bracket saw healthcare – at $336.07 – make up the largest increase in average household spending. However, the increase was partially offset by a $270.17 decline in average transportation spending.

For middle-income consumers, the largest increase occurred in the housing segment, which was slightly offset by a decline in apparel and services spending. Apparel was the only negative segment within the bracket representing men’s, women’s, and children’s clothing and accessories. What really stands out, though, is average food spending. Middle-income individuals spent – on average – at least $143.66 more on food than any other income bracket.

As a significant outlier, changes in transportation costs accounted for a whopping $2,076.22 change in average household expenses. Personal insurance and pensions also saw a steep decline of $1,049.63. Under normal circumstances, high-income earners usually prioritize investing over excess spending. However, in 2017, this wasn’t the case.

Changes in Food Expenditures by Age

How We Conducted The Study

To present the most accurate assessment of the average household budget within the United States, we analyzed data from the U.S. Bureau of Labor Statistics. Its Consumer Expenditures Survey – the latest annual report – provides analytical information about the labor force, consumer spending, and developments regarding living costs.

With inflation continuing to increase the cost of living, average income before taxes didn’t ease the burden, declining for the first time in five years. While year-over-year declines also occurred in 2013, 2010, and 2009, we found average income has a strong ability to bounce back. In fact, the two consecutive declines in 2009 and 2010 can be labeled as outliers – considering they proceeded with the 2008 financial crisis. Moreover, history shows that an increase the next year is often followed when average income declines.

With that, we expect the average income to trend higher in 2021. With U.S. GDP holding steady and unemployment near historic lows – both should support future wage growth.