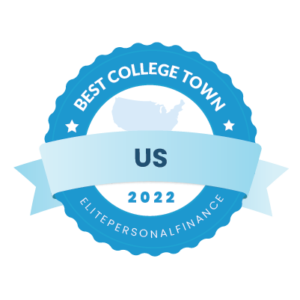 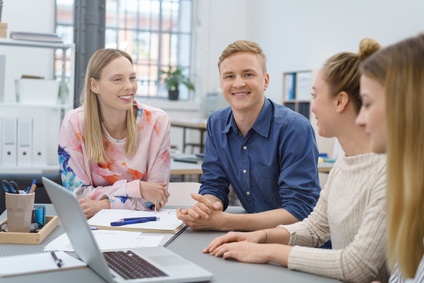 “What is the best place for my little child to go to college?”

This is a question that bothers so many parents in the US nowadays. After having saved enough money for your child’s higher education, you are probably going to think of the best college for them. However, apart from the quality of education and your budget, one of the underlying factors in your choice-making should probably be the safety of the campus and the town, which will be your child’s home for the next four years.

Of course, you cannot wander around the US searching for the best college town. That is why ElitePersonalFinance has made a list of the best college towns in 2022. We included towns across the US that have been traditionally famous for a great education, good students conduct and a safe environment.

ElitePersonalFinance analyzed the data from the FBI Crime Report. We particularly analyzed those crimes that affect college students most, such as car accidents, as well as alcohol and drug-related issues. This was our basis for safety ranking.

Also, we paid attention to the quality of higher education, cultural institutions, and recreational areas.

That is how we came up with the best college towns in the US for 2022.

Congratulations to all the awarded towns!

This small town is situated in Whitman County and has a population of 33,897 people. This town has been awarded many times, and one of the most important awards is the Bloomberg Businessweek award for Best Place to Raise Kids in Washington State in 2011. One of the great advantages of this town is Washington State University, a public research institution that is the second-largest higher education institution in the state, right after the University of Washington. Interestingly, the number of enrolled students at the university is approximately the same as the town’s population, so we can conclude that the town is peaceful. Also, the Pullman Police Department is well-known for being a staple of safety in the town.

The largest town in Hampshire County is home to 40,313 Americans. Similar to Pullman, it has been awarded numerous times in various important categories. It has been proclaimed as one of the best college towns, best places to raise outdoor kids, and most intelligent college towns. Furthermore, Amherst has a rather long and rich history when it comes to higher education. Amherst College, Hampshire College, and the University of Massachusetts Amherst hosts almost 35,000 students total. The latter, also known as Umass, is a public university famous for providing the highest quality education. It is the largest public university in New England and the 27th best public university in the US.

The most densely populated city in Indiana, with 46,541 residents, is located in Tippecanoe County, 65 miles away from Indianapolis and 103 miles away from Chicago. The city was home to Neil Armstrong and Amelia Earhart, who spent a part of their lives there. Residents of West Lafayette can be proud that their home has been developing very fast in recent years. Moreover, they should take pride in having Purdue University in their hometown. This famous university was founded in 1869 and has been known for excellent education ever since. It has the fourth-largest international student population in America. It is also a member of the Big Ten Conference, so if your kid is into sports.

Named after the town in England, this town is a seat of Bristol County and has a population of 22,255 people, which is one of the towns with the lowest population on our list. The town is historically rich and is one of the oldest in the US, where Independence Day was celebrated, dating back to 1777. The best-known industries in this town are tourism, manufacturing, and marine industries, particularly boat building. Also, Bristol has a vivid cultural scene – Bristol Art Museum and America’s Cup Hall of Fame are only some institutions that strive to improve the town’s cultural life and succeed in it. Bristol is home to more than 5,000 students enrolled at Roger Williams University. Bristol’s safe atmosphere is a result of the hard and dedicated work of the Bristol Police Department.

Maybe Bristol is a town with a small population, but in those terms, it can hardly compete with the 3,572 residents of Slippery Rock, and this fact alone can be proof of the safety of this little town. As a matter of fact, the number of residents of this town is three times smaller than the number of students at Slippery Rock University, which is over 9,000. This town is situated in Butler County, and it is a part of the Pittsburgh, PA Metropolitan Statistical Area. Sports events traditionally take an important place in the lives of both residents and students who live in this town. Furthermore, multiculturalism makes Slippery Rock an exciting place to spend your college years.

This beautiful New Jersey town is actually a municipality located in Mercer County, and it has a population of 31,845. It is close (around 50 miles) to New York and Philadelphia and very well-connected to major highways, with an airport being very close. Naturally, the most famous university is Princeton University. Still, many more high-quality educational institutions, such as Westminster Choir College, Princeton Theological Seminary, the Institute for Advanced Study, and the nearby Mercer County Community College. Numerous parks, museums, and historical sites, as well as McCarter Theatre, do not leave anyone indifferent.

This small town is historically known as ‘the Highlands’ in northern Kentucky and is one of the smallest towns on our list in population (7,178). It is close to several highways, making it easy for students and parents to reach this place. Highland Heights is home to Northern Kentucky University, which has around 15,000 students, and this tells us a lot about how popular this place is among college students.

Winona State University, founded in 1858 like Winona Normal School, is the area’s leader in higher education, followed closely by Saint Mary’s University of Minnesota. A seat of Winona County and home to 27,071 people, this town got its name after the allegedly first-born daughter of Chief Wabasha III. There are a lot of businesses with headquarters in Winona, such as the Watkins Corporation, Fastenal, Thern Inc., and many others, which not only improve the economic growth of the town but also offer great employment opportunities to all those students who fall in love with this place enough to stay here after college. One more thing you definitely have to see when studying here is Sugar Loaf, a river bluff of a very distinctive appearance.

This borough, a typical college town with only 6,204 residents, is situated in Erie County, in the snow belt region of Lake Erie. It is relatively close to its college sports rival Slippery Rock (around 60 miles away), making this region very popular for college students. Almost 9,000 students are enrolled at the Edinboro University of Pennsylvania, which is important for its economy and lively atmosphere.

Definitely the most populated city on the list so far, Grand Rapids is located on the Grand River banks in West Michigan and has 197,868 residents. The Grand Rapids Metropolitan Area has over 1 million residents, an important factor in young people’s social life. Nevertheless, despite the city’s size, it has been traditionally very safe and peaceful. In such a city, the cultural scene is highly vibrant, with institutions and events such as the Grand Rapids Public Museum, Grand Rapids Symphony, John Ball Zoological Garden, Festival of the Arts, and Celebration on the Grand others leading the way in the first-class cultural activities.

Situated beside Great Bay in Stratford County, this town is home to 16,751 people. Durham used to be called the Oyster River Plantation, and the Oyster River has great importance to the town. It has numerous libraries, such as Durham Social Library and Durham Agricultural Library, and interesting sites like Durham Historical Association & Museum. Durham is home to the University of New Hampshire, which hosts over 15,000 students, who double the town’s population during the school year.

Irvine is a unique town on this list for several reasons. First, it was founded as late as 1971, making it the youngest town on the list. Second, it is a carefully planned city, which has significantly contributed to its skyline. Finally, it is the most populated city on the list, with 276,115 residents and a constant growth tendency. It is located in Orange County and is very affluent and economically developed. Blizzard Entertainment, Taco Bell, and many more companies have headquarters in Irvine. There are over 10 colleges in Irvine, the best-known of them being the University of California, Irvine, California Southern University, Concordia University, Westcliff University, etc. The city also boasts numerous libraries, recreational areas, and parks, such as Northwood Community Park.

Orono lies on two rivers, the Penobscot River and the Still Water River, and it was named after Joseph Orono, a chief of the Penobscot Nation. With a population of 11,400, it is a perfect college town, especially if the University of Maine has over 11,000 students. It is a lovely little town with a familial atmosphere and pleasant, friendly people. Some of the interesting places in Orono are Fay Hyland Botanical Plantation and Lyle E. Littlefield Ornamentals Trial Garden, which will make you feel like you are walking in the Garden of Eden.

Eastern Illinois University, which hosts around 9,000 students, is located in Charleston. With 21,016 residents, Charleston is a seat of Coles County. The town is very safe and quiet, offering wonderful opportunities for studying and self-development. Parks and recreational areas and sports facilities provide high-quality spaces for recreation and physical activities. What is very interesting about this town is that Jimmy John’s restaurant was opened here in 1983.

Millersville is on the lower end of our list regarding the number of residents, which is 8,419. It is situated in Lancaster County and was named after John Miller, an important farmer for this region. The town is home to Millersville University, which has over 8,000 students enrolled and provides high-quality education for everyone who chooses this town as their home during their studies. With all this in mind, trust us on this one – studying in Millersville will be among the best memories of your life.

There you go, the best college towns in the United States. Now you can breathe a sigh of relief and choose one of these as a truly great option for your child. We hope this article has helped you. If you have any ideas or suggestions, please share them in the comments below.