You walk into a government building.

The lady greeting you would like to know your full name.

Next, she asks for your home address.

All of a sudden, she wants your Social Security Number.

Now hold up … wait for a second! 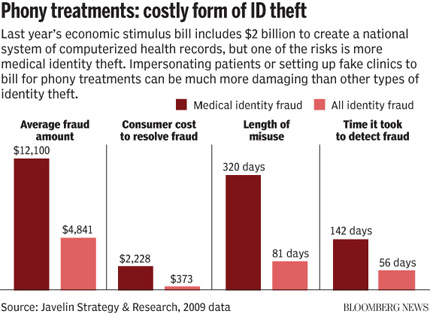 Javelin Strategy & Research held a study in 2009, where it was found that medical identity fraud cost victims almost triple that of normal identity theft tactics. In fact, the actual out-of-pocket costs to victims were seven times greater than that of all other types of identity fraud victims.

So, why are we so trusting in our government? The stats speak volumes for the identity theft epidemic that’s playing out.

It all goes to show that we, as Americans, cannot assume our identities are safe. It means we need to educate ourselves on how to stop potential identity theft attacks before they happen.

That’s not easy when the very system that’s there to protect us can turn its backs and destroy us in the blink of an eye.

You might shrug your shoulders at identity theft and think it will not ever happen to you. That’s what a lot of victims once thought, too.

When it comes to medical identity theft, it’s like getting selected for jury duty. You never know when it’s your turn, but you cannot get out of it once it happens. 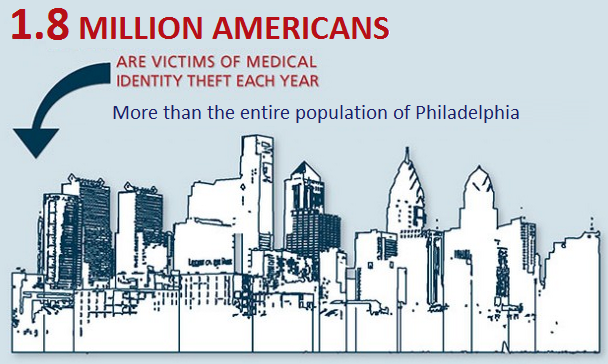 So, what’s really causing such well-authorized medical systems to be so vulnerable to exploitation? Nowadays, you would think that our government would be able to patch any weak spots with ease. Instead, the stats show a continued increase in medical identity theft victims year-over-year.

In fact, this recent study shows tremendous growth in cases of identity theft. 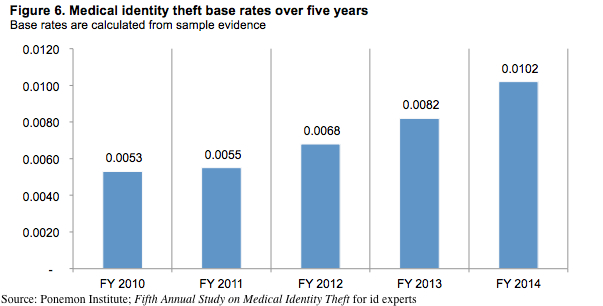 You must protect yourself today!

In most cases, medical identity theft occurs after a state health board member used their database access for bad. Their privileged access would allow them to grab the personal identifying information of upwards of millions of potential victims.

This means any database or server compromise needs to be taken seriously. The information that gets accessed can be used for identity fraud at any time. This is why those who might have had their information breached should invest in identity theft protection services. It serves as secondary protection, allowing for early detection if a criminal does abuse your information.

As it’s really a gamble whether you become a victim or not, it’s almost become second nature to rely on identity theft protection. The truth is in the numbers, and the endless multi-million victim attacks go to show that it’s just a matter of time before you are also a victim.

Most reported breaches took place at the state level, but take a look below to understand the magnitude of damage from the five largest medical identity thefts to date.

Over 10 million Americans were affected by the Premera Blue Cross hack. The exploited information included bank account details, birth dates, full names, addresses, Social Security Numbers, and medical records. It was approximated that around six million of the victims were residents of Washington State.

Over 4.5 million Americans were affected by the Community Health Systems hack. The exploited information included full names, addresses, and Social Security Numbers. The breach occurred between April and June 2014 and affected files from at least 29 states and 206 hospitals.

Up to 4.5 million Americans were affected by the UCLA Health Systems hack. The exploited information included birth dates, full names, health policy and Medicare numbers, medical records, and Social Security Numbers. The follow-up investigation leads to the conclusion that UCLA did not make acceptable efforts to encrypt the information.

How Serious is Medical Identity Theft?

The stats read loud and clear.

Above, you saw 100 million Americans, over a third of the U.S. population, become affected due to just one of five security breaches in the past year. This means that, whether you like hearing it again or not, medical identity theft poses a serious threat to the safety of your identity.

If you have identity theft protection, you will not have to raise any eyebrows and question whether your identity is safe from these risks. It is always possible that your identity will get exploited, but your protection plan will cover your identity restoration expenses and legwork.

That said, you cannot stop a state health board staff member from accessing your personal information and using it for illegal reasons. It’s the most unavoidable type of identity theft. This is because you cannot just avoid giving clinics, hospitals, and pharmacies your information.

Earlier this year, Forbes found medical identity theft has worsened over the years and has become a more significant threat in today’s society. One of the more alarming points is that when a state health board database is breached, the criminal will obtain enough information to defraud the victims whenever they want. So, just the list of names, addresses, and Social Security Numbers alone would be of use and abuse for a long time.

It’s the one type of identity theft you cannot prevent.

No matter how much identity theft protection can help, there’s little you can do when the criminals are hand-fed the compromising information. All you can do is attempt to minimize the number of damages you face. Or, hope your luck does not run out, and you evade one of the many attacks that take place every year.

We really want to help you keep your identity safe, but this is one area where not even sound advice can help!

If you had it your way, what would you suggest the government stop medical identity theft on a mass scale?

Changes Expected on Social Security in 2020

How to Avoid Scams When Shopping Online These Holidays?

The Ultimate Guide to Online Dating Safety – Tips on How to Protect Yourself?